Built in just a few weeks, the cloned voice of a popular podcaster unlocked Heise to double the frequency of their successful daily tech news podcast. 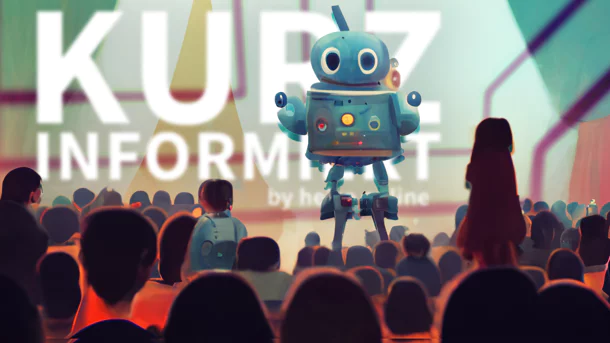 Built in just a few weeks, the cloned voice of a popular podcaster unlocked Heise to double the frequency of their successful daily tech news podcast. This didn’t only lead to increased advertising revenue, it also enabled the podcaster to create audio content without having to record anything.

Heinz Heise is a publishing house based in Hanover, Germany. Its focus is tech-oriented publications such as c't, iX and heise.de, as well as corresponding online services published by its UK-based subsidiary Heise Media UK Ltd. Heise.de has a reach of about 20M visits per month. c't is the computer magazine with the most subscribers in Europe (about 250,000).

Heise has been running “Kurz Informiert” a successful podcast for years and with about 500,000 plays per months it's one of the most sucessful tech podcasts in Germany. Famously spoken by editor Isabel Grünewald, the podcast is a daily format that brings the latest in tech news to its listeners.

According to Heise’s editor-in-chief Dr Volker Zota though, that is not enough: “There is so much going on in the world, we would love to create two podcasts per day. That way, we would be able to bring the freshest news from the US and other timezones to our listeners much faster.” - he states.

Doubling the frequency of the podcast would also increae revenue, as it's being monetized through ads on the platform. Publishers have been struggling with creating additional revenue and many see audio as a lucrative source.

Grünewald, who is also a professional speaker by training, has been creating the podcast as a one-woman-show until now and her time resources are limited. Recording a second episode every day is not something the podcaster could handle.

At Aflorithmic we provide the infrastructure to build audio at scale. This doesn’t just include text to speech and over 600 synthetic voices from the world’s best providers such as Resemble, DeepZen, VocalID and many more. We are also able to build our own, high-quality voices, which can then be used as a resource to build audio within Aflorithmic's API.audio infrastructure.

Using our Voice Cloner, a recording software specifically built to record speech in the most efficient and enjoyable way, Isabel recorded 2.5 hours of German audio, which was then used to train a speech model.

In a pilot phase, the Heise team created a second, synthetic podcast during one week. This was aimed to gauge listeners’ reaction to the synthetic voice of Isabel’s clone.

Each podcast included a disclaimer - “Did you notice? This was not my real voice…” - as well as a call for feedback by email.

In just one week the editorial team received almost 100 messages from listeners ranging from praise about the voice’s quality to concern about privacy and legal questions - a detail Heise is well aware of.

Hannah Moderkamp, Managing Editor New Media at Heise adds: “Doubling the podcast’s frequency certainly led to some cannibalisation, as listeners weren’t aware that there are now suddenly two episodes per day. We had seen a similar development in an earlier test with two human-recorded episodes per day.”

With the first pilot being a success it is now time to address some of the feedback coming from Heise listeners.

We are currently working on the next iteration of the synthetic voice, giving it even more personality and fixing some pronunciation issues we’ve seen in German and English words.

As one listener wrote: “(...) But what bothers me a little is the lack of breathing noise in the voice. There is no inhalation to be heard.”

One more item on our to-do-list!

Much more than just Text-to-Speech

Quick, scalable, and affordable, in 2022, digital audio production needs to be all of these things.

Whether it’s basic Text-to-Speech tasks or fully realised complex audio projects that integrate music and multiple voices, Aflorithmic is the go-to source. You don’t even need previous experience tackling the task at hand.

Aflorithmic Labs, Ltd is a London/Barcelona-based technology company. The api.audio platform enables fully automated, scalable audio production by using synthetic media, voice cloning, and audio mastering, to then deliver it on any device, such as websites, mobile apps, or smart speakers.